skip to main | skip to sidebar

Issue No. 14 TABLE OF CONTENTS

[N.B. You can click on highlighted names or titles to go directly to the referenced article.]

Steven Fama reviews MUCH LIKE YOU SHARK by Logan Ryan Smith

John Herbert Cunningham reviews SELECTIONS by André Breton, edited and with an introduction by Mark Polizzotti; MARTINIQUE: SNAKE CHARMER by André Breton, translated by David W. Seaman with introduction by Franklin Rosemont; HYPODERMIC LIGHT: THE POETRY OF PHILIP LAMANTIA AND THE QUESTION OF SURREALISM by Steven Frattali; and TAU by Philip Lamantia / JOURNEY TO THE END by John Hoffman, ed. Garrett Caples

Harry Thorne reviews BOOK MADE OF FOREST by Jared Stanley

William Allegrezza reviews AS IF FREE by Burt Kimmelman

Meredith Caliman reviews POETRY OF THE LAW: FROM CHAUCER TO THE PRESENT, co-edited by David Kader and Michael Stanford

Tom Hibbard reviews BLUE MOUND TO 161 and NIGHTBIRDS, both by Garin Cycholl

Eileen Tabios engages THE OTHER BLUEBOOK: ON THE HIGH SEAS OF DISCOVERY by Reme Grefalda


FEATURE ARTICLE
Herman Hesse's Siddhartha: A Fictional Account of the Life of Siddhartha Gautama, the Buddha by Nicholas T. Spatafora

Erika Moya reviews SLAVES TO DO THESE THINGS by Amy King

Of course, I’d like to share my son Michael’s first English-language poem, written from when his English as second language class explored the acrostic poem--and isn't it wonderful that the acrostic is introduced in an ESL-type class!):

Tables smash
Oh no!
Run, run for your life
Nobody is safe
All the houses are
Down, televisions crashing into cars
Oh my god, my
Son is safe!

Editing 101: Moi the Editor discussed his first draft gently. First, he originally wrote the second line as "Oh oh", and I had to explain that that doesn't work since the phrase is spelled as "Uh, oh" (such nuances as one learns a new language!). Then, we agreed that the first draft’s first line of “Tables move” would be better as “Tables smash” since the latter has more punch and is more specific. We’d been working with adjusting generalities or abstractions to specifics—so we also changed the original reference to “furniture” to “televisions” in the sixth line. Relatedly, his original sixth line simply had been “Down” but he thought he should add more details to that one-word line—isn’t he clever!

A close reader no doubt would glean the expansiveness of this 14-year-old’s world view—this poem is not written from a personal “I”’s perspective (not that there’s anything wrong with such) but from, moithinks, his parent’s point of view. So the ending lines of “my / Son is safe!” is him extrapolating from the loving care he receives at home. Makes this close (and unbiased) reader sniffle….

Here is the brilliantly budding poet; he is fresh out of the shower and bleary-eyed (or is it that he looks tortured by me?)—but I chose this photograph as he is also shown here stuffing a “Hay(na)ku for Haiti” (H for H) booklet into his pants for his school’s Pocket-in-the-Poem Day. It is ___ as you read this—have you ordered your fundraising H for H booklet yet? 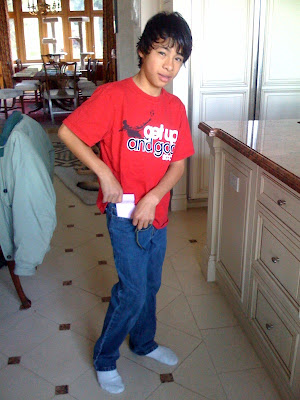 So, to official bidness: Thanks as ever to GR's numerous, generous volunteer staff of reviewers. In addition to some wonderful feature articles, we have 64 NEW REVIEWS this issue! I like to track GR's progress, so here are some poetry-lovin' stats!

Of reviewed publications, the following were generated from review copies sent to GR:

I continue to encourage authors/publishers to send in your projects for potential review. Obviously, people are following up with your submissions! Information for submissions and available review copies HERE. Future reviewers also should note that the next review submission deadline is November 1, 2010.

As of Issue No. 14, we are pleased to report that GR has provided 776 new reviews (covering 343 publishers in 17 countries so far) and 64 reprinted reviews (to bring online reviews previously available only viz print).

As I've said before, your Editor is blind, so if there are typos/errors in the issue, just email Moi or put in the comments sections and I will swiftly correct said mistakes (since such is allowed by Blogger).

I'd like to make a special mention of only the FOURTH non-poet to appear on Galatea Resurrects as a poetry book reviewer (I exclude students in writing/literature courses from this count as I know them as students, versus poets or non-poets). Which is to say, it's difficult to spread the Poetry Word out beyond the limits of "po-world", but it can happen. Welcome to Meredith Caliman, Esq. -- a lawyer in Southern California who graciously agreed to review pro bono. And which book did she review? Well, your mischievous editor sent her Poetry of the Law: From Chaucer to the Present co-edited by David Kader and Michael Stanford (University Of Iowa Press, Iowa City, 2010), described by the publisher as "the first serious anthology of law-related poetry ever published in the United States." Click HERE for the lawyer's take on poets writing about the law -- it's depressing. Actually, later in the issue is my review of THE OTHER BLUEBOOK, a novel written by poet-playwright Reme Grefalda based on her experiences as a paralegal for three "Big Law" firms -- this one is funny. Law: depressing and funny--that seems about right, says your editor...who happens to be married to a lawyer.

And I wonder what it means that of the four non-poet reviewers to date for GR (and one of them is Mom who I shanghaied outside the hallway of her bedroom into writing reviews), two are lawyers. In any event, GR would love to hear more non-poets' views on the poems being written today. C'mon, Peeps -- send your, uh, dentists, plumbers, masseuses (especially masseuses!), UPS or Fedex delivery people, etc. over to me! As regards poetry, I believe everyone's opinions can be worthwhile!

I also want to note GR's first review of Zimbabwean poetry--I like the continued expansion of GR's scope, this with the help of Emmanuel Sigauke who reviews INTWASA POETRY [anthology of 15 Zimbabwean poets] edited by Jane Morris and published by amaBooks in Bulawayo, Zimbabwe. Yay.

It occurs to me that you may be interested in this special themed issue on Poet-Editors which I curated for Otoliths. Since it contextualizes why I edit Galatea Resurrects, I raise attention to it...and hope you enjoy reading it!

Wait for it! One more photo of Michael, this time as he soothed Artemis aka "Botero Kitty" (her fur makes her look fat) when she injured herself and had to be in a cast for nearly two months. (Go to link if you want to see the special offer to GR reviewers with pets!) 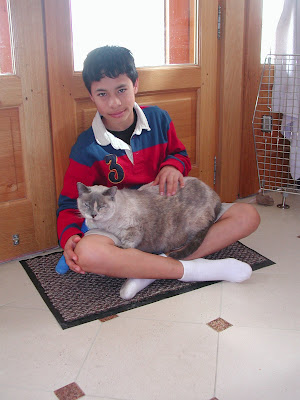 With much love, poetry and fur,