skip to main | skip to sidebar

The English translation of the French writer, Franck André Jamme’s Nouveaux Exercises, released by the Wave Books in 2008, is a very much unexpected — and atypical — booklet of poems. Published in a chic and elegant pocket-sized format in which space is as much valued as words on the page, the book opens with a warning to the reader “Not too fast,” before plunging into eighty-one little word puzzles of aphorisms, dictions, phrases, riddles, thoughts, interrogations and fragments in which alphabetical letters are arranged tighly in both symmetrical and asymmetrical squares or rectangles of “word search.”

Franck André Jamme’s introduction sets out the game clear and square, though with a touch of secretiveness:


Tablets like these used to be found on small gold leaves in ancient Roman graves. These leaves were typically folded inside the closed hands or mouths of the dead. They could be read as maxims, wishes, recommendations, or favorite sentences probably meant to seal the crossing over to the other side, that totally unknown country whose existence itself is so uncertain — the country of “the most numerous,” as the Romans called it.

In the following pages, there is no message for or towards the beyond; instead, just a pet hobby that materialized without warning then developed, like a fire, until it became a book. A game played with thoughts that are neither funny nor playful; a “game” in that it was amusing to watch as these thoughts drew steles, and amusing again to spend time, days later, trying to decipher them.
— p. V


Although it is hard to decide or judge if each “fragment” or word search leads to one another (or if they do indeed lead to somewhere), the experimental form of such tiny word searches are more than conventional word puzzles. Intriguing and appetizing, they do contain a certain strong allure, enticing the reader to decipher the aphorism by presenting two or three seemingly obvious words at the beginning or at the end, or somewhere in the body of the puzzle. One may often be misled into dismissing the puzzle as “easy,” when in fact another hidden message is still literally (and physically) lurking around the corner of the puzzle cube. Each alphabetical letter looks at once naked, pure and deceivingly “identical” when in truth, each letter does not quite belong to one another. Take for instance, Page 7: 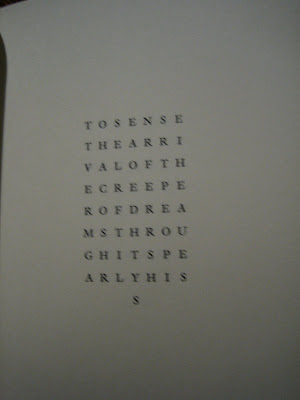 (Hidden message: “To sense the arrival of the creeper of the dreams through its pearly hiss”)

Or a “longer” puzzle (on Page 39) in terms of its verticality, even though only four letters, except the ending line, grace each “stanza”: 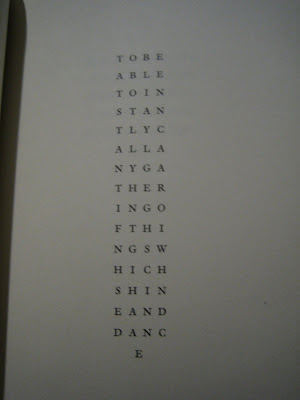 (Hidden message: “To be able to instantly call any gathering of things which shine and dance”)

Or perhaps a “shorter” one (on Page 10) in which there are three horizontal lines, in the strictest sense: 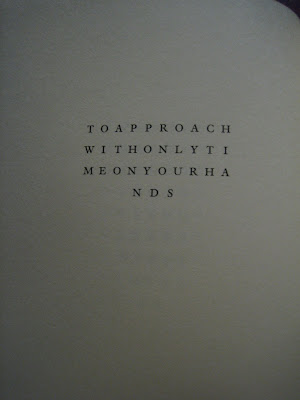 (Hidden message: “To approach with only time on your hands”)

While some words are more visible than others (and again, this is a question of subjectivity and concentration), other “invisible” words still necessitate a game with the eye before coming alive on the page. The equal spacing in-between each capitalised letter, and the meticulous arrangement of the puzzle on a page mostly dominated by emptiness all adds up to an overall enigmatic aura. In an inexplicable yet subtle way, I grow to like the whiteness around the letters greatly, in part because they seem to speak more than the letters themselves when my eyes fail to work out the riddles as fast as I would like. They are a sort of silence surrounding a labyrinth of words. They are what makes the text — and its simplicity —elusive.

Given that I am a Parisian and francophone, I regret not being able to locate and read the original French version before embarking upon this review. (The original French text was published by a small press, Éditions Virgile in Dijon, in 2002). In fact, I am very curious as to how the aphorisms would work and how each word puzzle would still function as an effective word search, considering that the French syntax differs from its English counterpart, and that as a hasty generalization, phrases tend to be lengthier in the French tongue. Would the accents give away the secret of words more easily when rendered in French, for example? How did Charles Borkhuis the translator negotiate with specific word choices, given the limited possibility of space and the demands of concision or density? How did he translate the elusiveness and exquisitivity? Perhaps this act of translating these tablets, as Jamme had called them, is also part of the visceral invisibility made visible.

Fiona Sze-Lorrain is the author of a book of poetry, Water the Moon (Marick Press, 2010), and co-founder of Vif Éditions, an independent publishing press in Paris, France. Also one of the editors at Cerise Press, and a guzheng concertist, she lives in France. Visit her website: www.fionasze.com